This Saturday there will be a concert to support people in Mali. The money will help villagers outside Gao to build wells. Yesterday I met up with MC Talka, a rapper from Gao, who just managed to escape from the country. There is a war raging over there and he gave me his version of the story behind. It goes back to the conflict in Libya where a large number of weapons slipped out. Al Qaida members joined with Tuaregs in northern Mali, who for a long time have wanted their own country. In the same region there were plans for extracting oil in 2012. In other words, there's more to this than meets the eye. The rebels get financial support from countries that are interested in the oil findings. According to MC, a french company who lost a mining contract in the region, has a part in it as well. A few days ago, there was news of a principal in a school in Gao getting shot by Al Qaida when he refused to separate boys and girls in the class rooms. These extreme Islamic type of actions are not what the Touregs stand for, therefor there is now a conflict among the rebels. When the war in the north had been going on for some time, a group of low-ranking army officers in the capitol city Bamako decided to make a coup against the president. The poorly planned operation only ended up destabilizing the the country even more. They soon realized the reality of things and gave up the power. Now, a new neutral government supported by the UN is in charge. Mali is a very peaceful country and the population is in shock that this could happen to them. Besides the obvious downsides, this has led to racism against Touaregs in general. That is exactly why we need events like the one this Saturday. To discourage prejudices. Come and meet MC Talka as well as people from other countries in West Africa. Come and listen to music from Mali, Senegal and Sweden. Come and see the diversity of Jämtland and the world.


The concert will take place at Ås föreningshus, 6 p.m. I will participate together with my friend Bengt-Anton Runsten, vocalist from the band Hindenburg. We will play both mine and his songs. 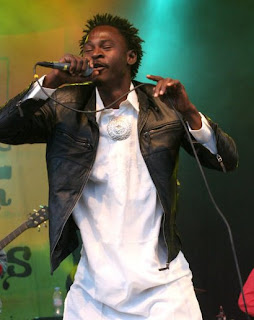 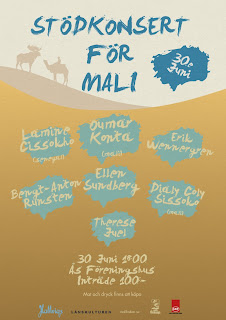